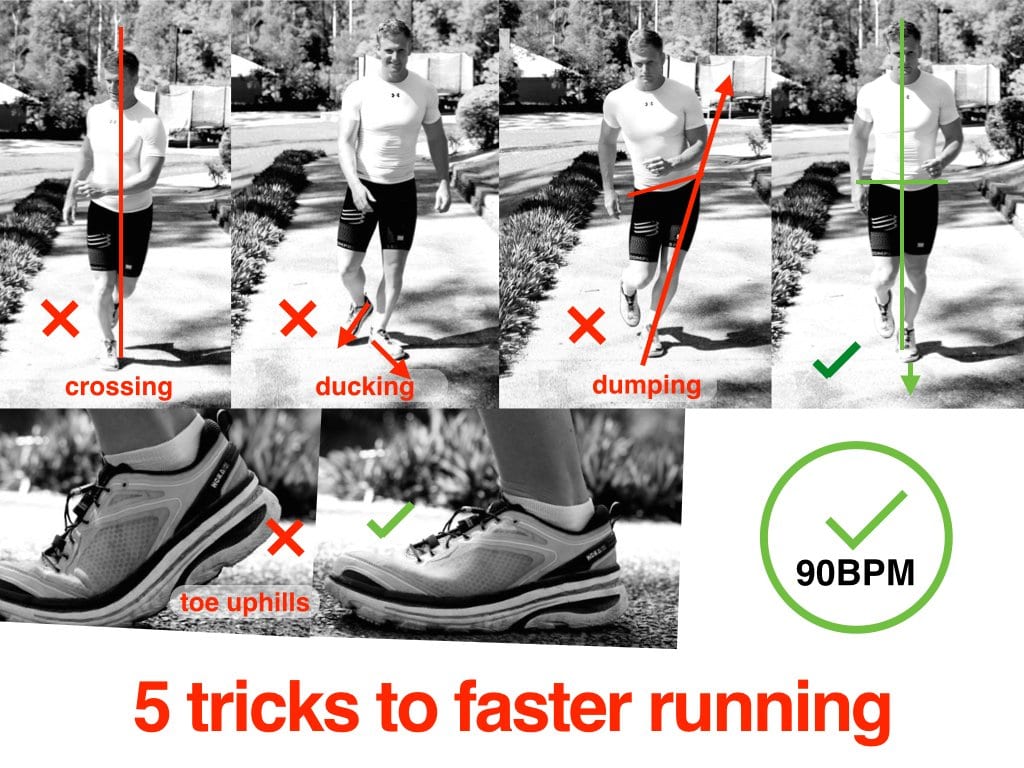 I weigh about 100kg. First thing in the morning after a week.  I’m heavy.  In running terms, I am too heavy to run.  But I run.  Why? I freakin love running.  I love that I am running when I am not meant to.

I have both meniscus torn, so every physio and orthopod (except my awesome brother) says I can’t run.  When I rock up to the start line of an ultra, almost everybody pushes to get in front of me so that I don’t hold them up.  I don’t blame them either, I don’t look like a runner.

I don’t train like a runner at all… But I am.  Last year I placed 3rd and 4th over consecutive weekends for 55km and 45km trail races.

People say I am an anomaly or a freak, but I’m not; I’m no different to anybody else.  The difference for me is that I know how to run more efficiently.  To get the most distance for the least effort.  And I’d like to share them with you.

So here are my 5 tricks to getting a better performance in your next run.

Don’t cross the midline with your arms.

Your arms should be pointing more or less in the direction you want to go.  If you’re finding yourself swinging your arms left and right but going nowhere, just change the angle of the swing to be more forward and back.

Stand up out of your desk and look at your feet.  Having your toes pointing outward it a very stable position to stand; but it is extremely inefficient for running.  I call it ducking, If you run like a duck, you’ll go as slow as a duck.

Running with your toes pointing out puts enormous strain on your hips, knees and ankles.  Aim your toes where you want to go, and you’ll get there faster.

Don’t dump through your hips.

I see a lot of runners doing this.  On landing, you’ll tend to dump your opposite  hip toward the ground.  If you take a look at the picture, you’ll see the transfer of power from the ground travels right up through my hip and out into nothing.

To now take the next step means I’ll have to use my hip muscles to stand up straight.  Watching someone dumping from the front kind of reminds me of how a gecko walks.

Keep your hips square when you land and you’ll be able to run much faster.

Land with flat feet on hills.

Forefoot running is quite the trend, but nothing kills calves like running 8 or 9 k’s uphill on your toes.  Land with a flat foot and a shorter stride; and you can use uphills as a way of resting your calves.  I overtake most people on uphills now, where before I would need to massage my calves on the way up.

For me, and a lot of my running friends, there is a magic cadence somewhere between 85 and 90 beats per minute that puts all of the above into place for you.

Here’s a YouTube clip of what I mean, all you have to do is make sure your right foot lands on every beat.  Depending on your anatomy, it will be somewhere around the 90 BPM mark.

That’s it, 5 tricks to making sure your next run is faster.

After you’ve done these, you’ll probably be addicted to running like me, so I’d suggest these 4 add-ons to your arsenal of running:

First ultra I did crushed me, because I never trained on hills.  I just ran distance.  Now, I run hills at least once a week.  And I’m not talking a little 300m hill in your flat run, I mean the whole run as uphill.  It’s a great way to train yourself to flat foot land, but not dump in the hips.

Believe you are a good runner

The thing I love about ultra running is the diversity of athletes.  Quite often, women will beat men; older runners will beat younger runners.  Why?  Because running starts with the belief that you are a good runner.  All the great runners I know, first came to the decision that they were in fact, runners.

If you’ve ever been skiing, you’ll know that coming down a mountain slowly is tiring.  “Controlling the fall” makes your run much faster, and not so tiring.

Running is the same, you either work hard on the way down the mountain, slamming your brakes on every step, or you ski down the hill by leaning forward and dropping your butt out the back.

Mastering downhill running is dynamite on long runs.  If you can “ski” down the hill, you’ll be able to use downhills as a recovery; not work.

I’ve always found it perversely funny that cyclists will spend thousands of dollars to save a couple of grams here or there on their bike weight.  But they stop for coffee and cake.  Losing 5 or even 10 kilos makes a phenomenal difference with running.

Thanks for reading and as always, we love to hear from you, so please drop us a line in the comments below!