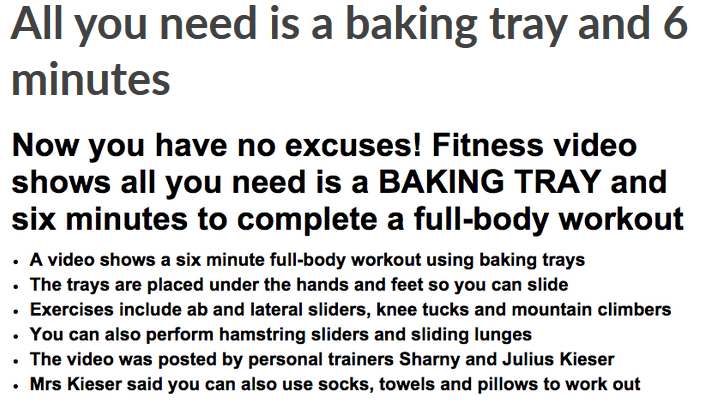 They're commonly used to bake biscuits, but the humble baking tray can actually help you lose weight.

Personal trainers and husband and wife duo Sharny and Julius Kieser have shared a video of a six-minute full-body workout - using two baking trays in place of gym equipment.

Mrs Kieser told Daily Mail Australia if the workout was done everyday it would only a few weeks to start seeing results.

Ab slider: Persona trainers Sharny and Julius Kieser have released a video that shows you how to do a full-body workout using two baking trays

Mountain climbers: The trays are placed under the hands or feet allowing you to slide across the carpet

Lateral slider: The workout shows a series of six exercises, including hamstring sliders, that are performed for one minute each

'You would start seeing results in a few weeks in terms of fitness,' she said.

'By eight weeks time you would have a major difference in body tone.'

And when it comes to working out at home, baking trays are just the beginning.

Hamstring slider: Mrs Kieser said anyone who did the workout everyday would notice a change in their fitness levels after two weeks

Working up a sweat: After eight weeks of doing the workout daily you would see a change in your body tone

Muscle mass: But Sharny says that when working out at home, baking trays are just the beginning

Bath towels, pillows, tins of spaghetti and drink bottles can all be used as workout equipment, saving you time and money on expensive gym memberships or weights.

Each exercise is performed for one minute each.

Fitness duo: Mr and Mrs Kieser share workout videos and fitness tips online and have a number of books

Home workout: Use pillows or towels for an uneven squat (left), or a mop bucket for a bicep curl (right)

The video of the simple workout has since gone viral, with more than 46,000 views since it was uploaded on Monday.

'We have to try these when we are to broke to afford gym membership,' one person wrote.

Others voiced their concerns that a baking tray would scratch their tiles or wooden floors - but Mrs Kieser had a solution.

'People who don’t have carpet, who have wooden floors and tiles, you can use socks on your hands and feet to do the same sort of movements,' she said.

'You could even use hand mops and clean the floor at the same time.'

A common exercise performed at the gym is tossing a medicine ball from side to side.

Mrs Kieser said you could perform this exercise at home using a pillow.

Body weight training: You can perform a pull up by hanging underneath the table

Towels or pillows piled on the floor can be used to perform an uneven squat that allows you to activate your core and leg muscles.

Another trick is to use tins of spaghetti or bottles of water as hand weights or to lay under the table and perform pull up.

Multi-tasking: Mrs Kieser is known for her fit approach to pregnancy and was pictured exercising while breastfeeding her two-week-old son

Transformation: The Queensland resident is a mother-of-six who previously gained 30 kilograms during pregnancy (left) before taking a fit approach to pregnancy (right)

Mrs Kieser, who is a 35-year-old mother-of-six, is known for her fit approach to pregnancy.

The Queensland resident has previously gained 30 kilograms during pregnancy, and plagued with severe morning sickness and post natal depression, vowed to make a change.

Through what she calls a 'fit pregnancy' - exercising regulalrly and eating well - Mrs Kieser said she had no morning sickness or post natal depression.

Check out the workout video here