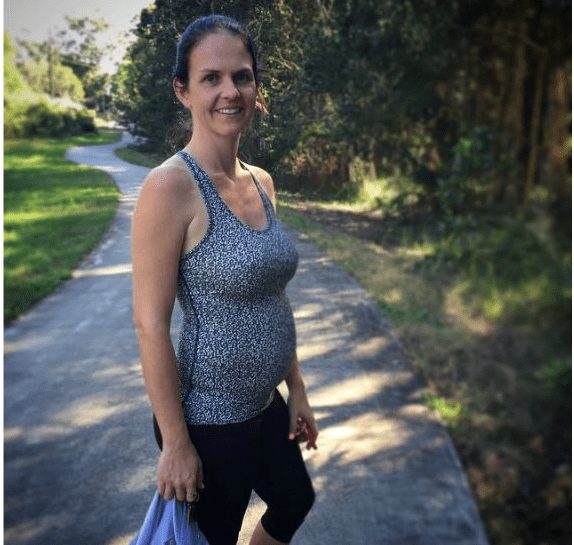 Mom of 6 causes a stir with “breastercising” photo

Sharny Kieser was recently advised by one commenter to “cut the multitasking crap” when her husband posted a photo of her feeding their sixth child to Facebook.

Take a look at the image he captioned in part: “I caught Sharny multitasking today. In public. #breastercising.”

Little Magnus, who is Sharny and Julius’ sixth child, was born just two weeks ago!

Explaining why she’s mixing nursing and squats to Daily Mail Australia the personal trainer shared, “A lot of people think it’s gross or strange or that I should be bonding with Magnus, but I feed six times a day, I’m not exercising every time and when I do I’m also watching the kids ride around on their scooters and play outside.”

“It’s not like I’m running or leg pressing or doing weights, I’m doing squats and lunges as they are the easiest things to do while feeding…then at night we sit quietly and feed,” she went on to say. “On average it can be around 70 calories per 100mL feed – so six feeds a day you can burn quite a few calories.”

“Walking, squatting and doing things makes me feel better and feel good…with Hugo, my fifth child, I waited a few months before exercising again and it was much harder,” Sharny, who transformed into a “fit mum” after shedding 66 pounds between pregnancies four and five. “If I wait less time I bounce back faster and it also helps with postnatal depression.”

While there were quite a few commenters who applauded Sharny’s moves (or at least got a chuckle out of the idea of breastercising), others blatantly do not approve. One comment left on Facebook reads:

“Really! Breast feeding while exercising? I breastfeed my 3 children and felt that they deserved all my time and energy whether it be in public or private. Don’t have an issue with breast feeding at all, I think it’s wonderful, but for the little time you have them as tiny tots could you cut the multitasking crap for 10 mins and enjoy the one on one time with your child. We are/were all busy mums but I think our children deserve us to be completely in the moment with them.”

Although I can see where this commenter is coming from, I can only imagine what life is really like with six kids! I just can’t see any way Sharny would manage “one on one time” with her youngest when the others were home no matter if she were exercising or not. If they’re all out in the yard playing why not work out a little bit if you feel ready?

Plus, the reality is breastfeeding can get really boring. I, too, had moments it felt magical and the world took on a soft glow as I gazed at my babies, but that just doesn’t happen all the time — and many moms end up watching TV or turning to their phones to pass the time. Is doing a few lunges really so different?

My breastfeeding days are long gone, so I won’t be emulating Sharny’s moves, but I’m here to cheer on anyone who has the ambition to try it!

That time when Breastercising went viral…