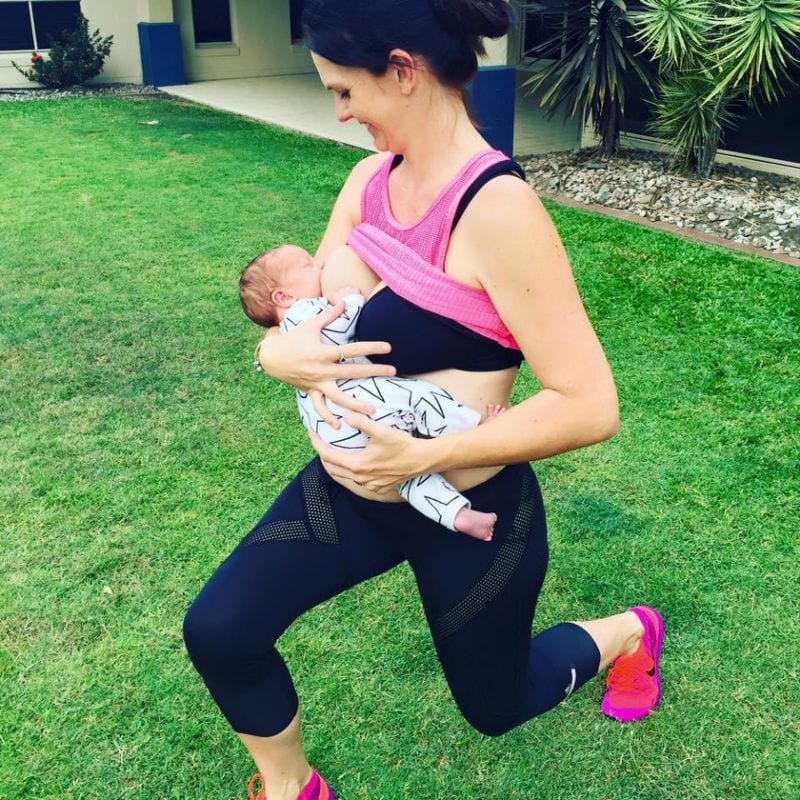 A proud husband's photo of his wife working out while breastfeeding has sparked controversy on Facebook.

Exercising is nonnegotiable for 35-year-old mom Sharny Kieser, who is also a fitness trainer and the author of the

, which was inspired by her own journey losing the 66 pounds she'd gained after her first three children.

It's no surprise, then, that she's already back to doing lunges just two weeks after popping out another baby—her sixth!. What is surprising is the reaction Sharny received after a photo of her breastfeeding while working out went viral.

"I caught Sharny multitasking today. In public. ‪#‎breastercising‬," her husband Julius wrote on Facebook, captioning an image that showed his wife lunging while nursing their two-week-old son, Magnus. "I don't get the whole breastfeeding in public problem. It's not disgusting at all."

But the proud husband's photo apparently sparked controversy for a different reason. "Don't have an issue with breast feeding at all, I think it's wonderful, but for the little time you have them as tiny tots could you cut the multitasking crap for 10 mins and enjoy the one on one time with your child," wrote one commenter. "We are/were all busy mums but I think our children deserve us to be completely in the moment with them."

Added another: "I honestly don't understand why it's necessary to exercise whilst breastfeeding? Is it even comfortable? Can you concentrate on doing the exercise properly?"

Apparently she can. "A lot of people think it's gross or strange or that I should be bonding with Magnus, but I feed six times a day, I'm not exercising every time and when I do I'm also watching the kids ride around on their scooters and play outside,"Sharny told the Daily Mail Austrailia. "It's not like I'm running or leg pressing or doing weights, I'm doing squats and lunges as they are the easiest things to do while feeding. Then at night we sit quietly and feed."

A perfect response! Though it's sad that in this day and age, the mom of six even felt the need to have to defend herself. To each her own, right? Go get 'em, Sharny!

‘Breastercising’ Mom Sharny Kieser Under Fire Due To Breastfeeding While Exercising