Tag Archives for " Sharny and Julius "
0 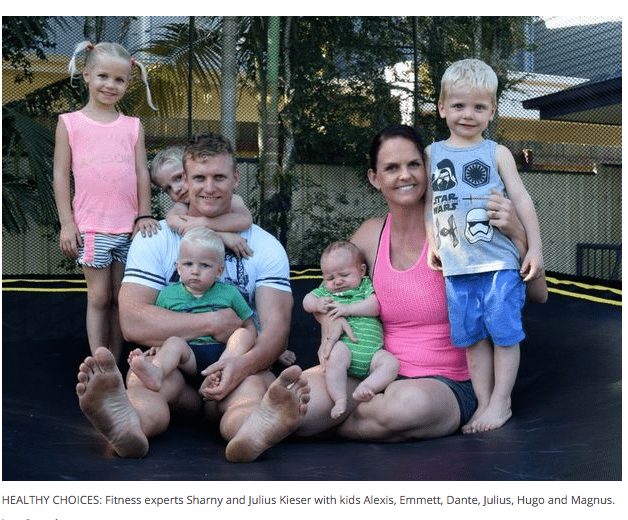 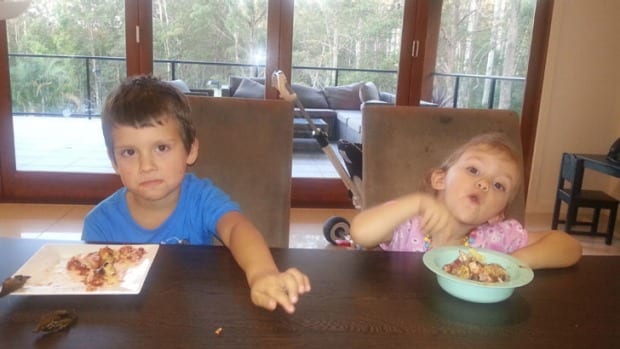 Dinner with Sharny and Julius

Feeding my children nutritious food is important to me, but I’m also human and when my day goes pear-shaped I’ve often resorted to meals of drive-thru variety. My week generally starts great and is full of home-baked and healthy treats, but somewhere about Wednesday the wheels start to fall off and we fall into some unhealthy habits.

I recently saw Sharny Kieser, aka Fit Mum, at a presentation on healthy lunchbox ideas at my daughter’s kindy. The food she presented on the night tasted great and I felt inspired, but peanut butter made from sunflower seeds? Fried rice made from cauliflower? I wasn’t quite sure my kids would feel the same, so like any nosy journalist would, I invited us all over to her house for dinner to see if her ‘Healthy Junk’ would get a thumbs up or thumbs down from the harshest of culinary critics, my son Jamie, 5 and daughter Jessica, 3.

I’ll admit my children aren’t ‘bad eaters’, but we have our challenges. Jamie is the ultimate carnivore and will eat a plate of baby octopus, but gag if presented with a banana. My dainty salad eating daughter is easily distracted at mealtimes and will be ravenous at bedtime because she’s ‘forgotten’ to eat all day.

The healthy spread of groceries from the Fit Mum feast. Photo: Cassy Small

I briefed my children by simply saying we were going to a friend’s house for dinner. The moment of truth arrived and we’re greeted by Sharny and her husband Julius’ three youngest children, all aged under four. Enthusiasm is an understatement. Feed a child all the organic, grain-free fodder you like, but dinnertime with a toddler, let alone three, is never easy. I silently applaud them for getting through dinner prep without a wine glass in sight.

I follow the amazing smell to the kitchen where a feast is being prepared. Their kitchen is big and there’s a lot going on. Granted, it’s not every day you feed three adults and five children, but the prep work that’s going on makes me worry I little I couldn’t pull off something like this in my own home.

That is until I see the fried rice.

Sharny’s version has all the usual ingredients in there; egg, shallots, ham. Except in this instance the rice is replace with processed cauliflower. Julius throws three big chunks in their Thermomix and in less than five seconds we’ve got ‘rice’, he tells me a food processor will produce the same result.

Jamie approached the bowl apprehensively, took a reluctant bite and refused anymore. Jessica flat out refused. Okay, healthy fried rice wasn’t a winner, but I’m prepared to try this again at home because it ticks all of my boxes; fast, healthy and delicious!

Course two is pizza, a regular in our house. We usually make our own, and I like to think it’s pretty healthy anyway, but Sharny has upped the stakes by replacing the carb-laden base with a thinly filleted chicken breast. It’s smeared with tomato paste and topped with mushrooms, ham, fresh pineapple and cheese. Success! While Jamie was at first put off by the large basil leaves on top, both of them ate almost all of what they were served.

Next was dessert. Unfortunately the habit of a little something sweet after dinner is well-entrenched in my children. This is certainly an area I need some help in. I think we all cheered when Sharny told us that chocolate ice cream and handmade chocolates would be on the menu. We pull out the Thermomix again to help us turn frozen bananas and an egg white into ice cream. I’m blown away at how much it looks like deliciously creamy vanilla ice cream, it tastes great too! Making chocolate ice cream is as simple as adding some raw cacao powder. It looks like the real deal and the kids run to the table to eat. A few spoonfuls in though and my sweet-toothed children have had enough. The same happens with the hand-made chocolates. On the other hand, Sharny’s children, who have rarely been exposed to refined sugars, devour theirs and desperately seek out more.

I understand that our tastebuds grow accustomed to eating less sweet foods, but it’s actually quite confronting to see how my children at such a young age have already become affected by sugar. We’ve been making the frozen banana ice cream, sans cacao, at home in the blender for the past week now with much success.

So aside from the fact that my children eat too much sugar, what have I learned? Not all foods on the menu on the night were a success with my kids, but that doesn’t mean I won’t try them again. Raising a healthy family is a lifetime journey, not something that can be conquered at a dinner party or in a 12 week challenge, as long as we’re all on the same path I’m sure we’ll end up at the same destination.